By Request of the People 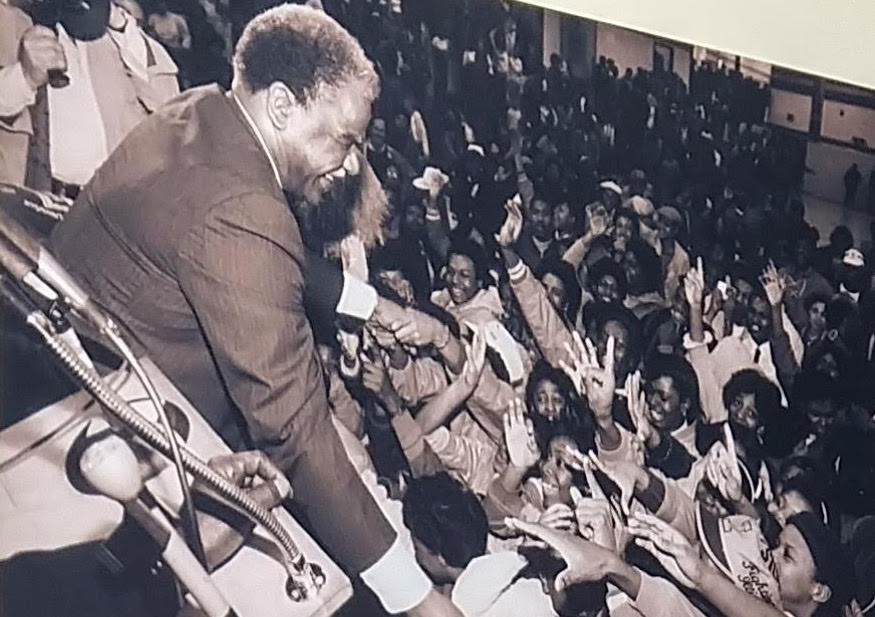 In 1967, civil rights leader Martin Luther King considered Chicago to be the “north’s most racist city.”  By the early 1980s, little had changed.  Chicago still was a city divided by classism and racism.  At the time of Harold Washington’s announcement that he would enter the Mayoral election in 1982, Chicago was rapt with the powerful Democratic Machine of backdoor politics wrought with political favors and questionable appointments that fostered the cliche attributed to notorious Chicago mobster Al Capone “Vote early and often.”

Harold Washington embarked on a campaign trail that would unite man of the City’s minority communities under this campaign slogan “Let’s come together for one City.”  Opposition to Washington’s campaign came swiftly tinged with racial overtones.  Supporters of the Republican candidate Benard Epton launched a negative crusade promoting race as a key factor opposed to the merits of Washington’s political qualifications.  Race played such an important factor that many long-time Democrats decided to support the largely unknown Epton.

The negative campaigning and racial undertones gained national attention in the media.  In spite of the fact that the campaign was grueling and at times vicious, Washington would eventually win the Democratic primary election of February 22, 1983 with 36% of the vote, defeating incumbent mayor, Jane M. Byrne, and Richard M. Daley (son of four-term mayor Richard J. Daley).  Washington went on to win the general election on April 12, 1983 with 52% of the vote, defeating Epton and Socialist Worker’s candidate Ed Warren.  Harold Washington, the City’s 42nd Mayor, was inaugurated at Navy Pier on April 29, 1983.

As activist efforts met with a hostile government response, many advocated for change from within through fuller political participation. Civil rights groups and the Black Panthers had trained a generation of future politicians in community organizing. In Chicago, this movement met resistance from the  “machine,” an entrenched system of patronage and favors. Black politicians had traditionally gained limited power under white leadership by supporting the city’s Democratic machine. However, Black voters grew increasingly disenchanted with Mayor Richard J. Daley’s administration after several incidents of police violence. Harold Washington’s election as Chicago’s first Black mayor marked a turning point. Widespread frustration with machine politics, a successful voter registration drive, and a multiracial alliance propelled Washington into office. His progressive agenda and coalition-building skills endeared him to many, even as antagonism from the City Council impeded his work.

By the mayor’s untimely death in 1987, several other Black politicians had risen to key posts in the city and state, positioning Chicago as an important center for African American politics – and paving the way for a future president’s career.

The 2008 election of Barack Obama as the nation’s first Black president gave many people hope for a new chapter in race relations. The rising star got his start in Chicago politics. Inspired by Harold Washington, Obama moved to Chicago after college to work as a community organizer. He returned to Chicago in 1992 to direct the “Project VOTE!” campaign that registered 150,000 new Black voters. After a successful run for U.S. Senator in 2004, Obama entered the presidential race in 2007. His coalition-building abilities, like those of Washington before him, helped him win the election.

“…Barack Obama is a part of what we dreamed and struggled and died for.”
– Former Black Panther Party leader Bobby Seale, 2008

Some believed – or hoped – that Obama’s election signaled the dawn of a post-racial society in which skin color was no longer a determining factor in American life. Yet troubling events continue to challenge this idea. Longstanding systemic issues such as racial profiling, police brutality, media bias, and a deeply flawed justice system remain as present as ever.
These inequities, however, have sparked a new generation of activism. Organizations such as Black Lives Matter and We Charge Genocide have mobilized to address the continued national legacy of racism. They carry on an equally potent legacy of standing up for justice.